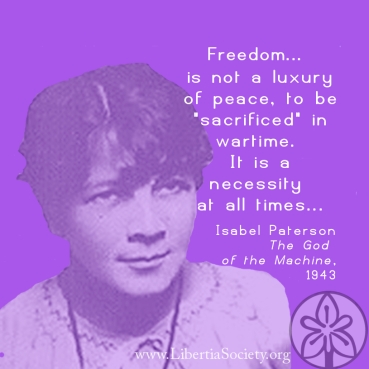 A Canadian-American who was a political theorist, a novelist and a columnist, Paterson and her works are probably the least well known of the early 20th century women libertarian trio which also includes Rose Wilder Lane and Ayn Rand. Her main non-fiction work, The God of the Machine, is a philosophical and theoretical exploration of the causes of societal flourishing throughout history. Her many novels, book reviews, and columns which were popular in her time are rarely read today.

Where should I start?

The God of the Machine. The clearest statement of Paterson’s philosophical and political beliefs, in this work she attempts to answer the question of why some societies thrive while others do not (hint: laws matter). One of the most well known chapters, “The Humanitarian with the Guillotine” is a good place to begin if you’re unsure about committing to the whole book.

The Golden Vanity. A later novel of Paterson’s about the struggles faced by a mix of characters after the stock market crash of 1929 and the economic depression that followed. Paterson explores many of the same themes as Ayn Rand’s fictional work but from a different perspective.

The Isabel Paterson Archives at the Herbert Hoover Library. If you’re feeling adventurous, you can take a trip to West Branch, IA where the Herbert Hoover Presidential Library Archives has boxes, and boxes, and more boxes of her columns, books reviews, novel fragments, drafts of published work, letters, and more.  We’re working with them to make some of these available online but you may have to wait until Women’s History Month 2016 for that.

The Woman and the Dynamo: Isabel Paterson and the Idea of America. If you’d like to read something about her in addition to things by her, we suggest Stephen Cox’s biography. Cox is also currently working on a compilation of many of her writings from the archives that should be available for purchase in the next year.

What are some awesome quotes by her?

“If there were just one gift you could choose, but nothing barred, what would it be? We wish you then your own wish; you name it. Ours is liberty, now and forever.” -“Turns with a Bookworm,” December 28, 1941

“The principle of social harmony is liberty, the rights of the individual…”
-The God of the Machine, 1943

“Most of the harm in the world is done by good people, and not by accident, lapse, or omission. It is the result of their deliberate actions, long persevered in, which they hold to be motivated by high ideals toward virtuous ends… when millions are slaughtered, when torture is practiced, starvation enforced, oppression made a policy, as at present over a large part of the world, and as it has often been in the past, it must be at the behest of very many good people, and even by their direct action, for what they consider a worthy object.”
-The God of the Machine, 1943

Want to support us?

If you would like to support the work of The Libertia Society, please donate with the email
contact@libertiasociety.org.

Donations are not tax-deductible at this time.